As of March 11, 2020 all of Montana’s major fishing drainages are sitting at or above 100% of normal. Obviously, that’s great news for trout and anglers alike. If things continue on the current forecast we should be in for another great year of fishing in SW Montana. Check out the images below and see for yourself.

On another note, our regional 3 biologist Scott Opitz spoke with the our Joe Brooks Trout Unlimited chapter here in Livingston recently. According to their recent fish surveys and comparisons with past data the Yellowstone River trout numbers are maintaining historical averages. Another positive note was very good requirement of 3 year old (approx 16″) rainbows in the sampling. Of course that’s what all of us fly anglers love to hear!

The next few months (April, May & June) temperature and precipitation probability forecasts also look favorable for anglers and trout this year. MFG guide Jeff Welke and angler Mike W., who took advantage of our Spring Special, had some solid fly fishing on the Madison River this weekend.

About a dozen fish made it to the net, primarily on nymphs. Most productive were larger copper & brown zirdle bug flies trialed by hot head nymphs. Various squalls made any dry fly fishing tough, but a lot of midges were out. Fishing was consistent throughout the day, but early starts certainly aren’t necessary.

Weather was cool and overcast with small squalls coming through. Temperature were in the 40s, so basically good early season conditions.

No biggies on the day, but who’s going to shrug at several cookie cutters, a 16″ Rainbows and an 18″ Brown? All aboard couldn’t have been happier, plus Mike got a jump on some early season fishing and saved a few bucks with the Spring Special. Our 2016 fly fishing season certainly was dramatic with the temporary Yellowstone river closure. Let’s first discuss the actual fishing – which is always the easiest part. Our early season fished fantastic from April until early July on the Missouri River, Paradise Valley Spring Creek and the Yellowstone River.

– At times per usual from April through June the Missouri fished outrageously good. The lower, but consistent river flows made for steady nymphing (both deep and short leash). Dry fly fishing was a bit more variable as cooler weather and water temperatures made for limited opportunities.

Paradise Valley Creeks – DePuy Spring Creek in particular fished good as usual during this timeframe. Good numbers of fish and relatively consistent hatches provided excellent sight fishing opportunities. Baetis (Blue winged-olives) in the early season and PMD’s (Pale Morning Duns) throughout the latter part of June made it the reason most anglers return year after year.

Yellowstone River – the unusually early season run-off made for some excellent late season June fishing. Salmon flies were not prolific, however the summer caddis, Golden Stones and other less prolific hatches were quite good.

Mid Summer fishing (July through early August) – the Boulder River, Stillwater River, Yellowstone were rather inconsistent at times, but our veteran MFG guides made the best of the opportunities. Highlights were probably the early season in Yellowstone Park on the Lamar and Soda Butte Rivers. Productive, consistent hatches with larger than average Cutthroat numbers made for memorable highlights for nearly all of our anglers.

Now to the dramatic events of the 2016 season. On August 19th the Montana Fish Wildlife & Parks (FWP) closed the Yellowstone River and all of the tributaries connecting to the river. This action was unprecedented in Montana and the West in general, and based on the unusual die off of an estimated 4,000 Mountain Whitefish. In the subsequent research it was found the die off was attributed to an invasive parasite that effects both trout and whitefish. The river and tributaries remained closed for about 2 weeks until it was revealed that only a few trout failed to resist and died from the parasite. Let’s emphasize that last statement – only a handful of trout died. In light of that research and cooler water temperatures, in which the parasite does not thrive, Montana FWP lifted the closure on the majority of tributaries and the Yellowstone River itself. 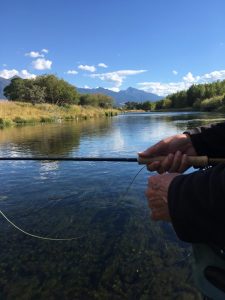 To summarize the Yellowstone River closure of 2016 – few trout were effected and the majority of fishing restrictions were lifted within a couple weeks time. How did this effect fishing? Other than some limited float fishing options for anglers it really wasn’t much of an issue. At Montana Fly Fishing Guides, llc. we take you to the best possible fishing – so as the Yellowstone hadn’t been the best option in the week leading up to the closure we’d already started taking anglers to other waters that had been fishing well. This TripAdvisor Review pretty much sums up our time during the Yellowstone River closure:

Sep 7, 2016Reviewed by mbdonovan1
My husband and I had a great time fly fishing with our guide Zach!!! He is awesome!! Eric set everything up for us and he was so helpful with everything. He quickly calls you back and answers e-mails. With the Yellowstone closing several days prior to our trip we were a little nervous about what to expect. Both Eric and Zach helped to make the trip amazing. We will def. be back!!!!

So as the winter season progresses and we get some more data on fish populations this spring we’ll keep you posted. However, in the mean time make sure to start planning your 2017 Montana fly fishing trip now so you don’t miss out on your preferred guide, lodging or fishing location. We’ll look forward to seeing you this coming fishing season.